JesikaErisooldaYdidaLomeynn, or ‘Jes’ for short, is a magic +2 intelligent dagger with a large blue topaz in the pommel (not pictured).

Jes the dagger replies to Maltron. “Maltron eh? The soldier Max mentioned you were the boss.”
After listening Mal’s story, she responds haughtily. “If I could spit in disgust I would do so now. I knew Morslade was a counterfeiter and forger but I had no idea he was a slaver as well. Good and blessed riddance. My creator was the mage ‘Verray the onion-nose.’ Verray had a disturbing interest in communing with denizens of the abyss, he had me made to act as a translator in summoning circumstances. Unfortunately, Morslade was his apprentice and one day I found myself in his possession. The only explanation offered was that of a summoning gone wrong, in which Verray was killed. Based on his character and Verray’s talent, I suspect foul play on behalf of Morslade, perhaps a poisoning. Verray may have had an unnerving interest in the demonic but he was no fool. He was meticulous in his attention to detail regarding protection circles and the arcane cagings of his dark visitors. When I would not discuss with Morslade, the conversations had between Verray and the outer planar, he was furious. This Trist…is it? They have no idea the service they have done in dispatching that dog faced, dung eating Clodfumblewipe.” 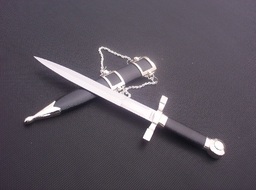