Hoken goes way back, he is one of the original guardians. Hoken is an 11th level fighter. He is also the owner and operator of a Frontier tavern called ’Charcoal’s’. He is Master of the Frontier Adventurers guild. He is considered a Frontier Noble and he is a member of the Guardians of the Frontier

Hoken carries a frost brand broadsword +3. Plate mail +3, Handaxe +2, Dagger +3, A heavy crossbow of speed, a lightning lance (10 charges 3d6 lightning bolt), a coral necklace that allows the wearer to cast ‘blur’ on themselves 3 times per day, a frontier guardians signal, a wand of magic detection, a ring of invisibility, a ring of featherfall, and a ring of wishes (1 left)

He also has a Psuedo Dragon familiar named ‘Charcoal’ of whom his tavern is named after. 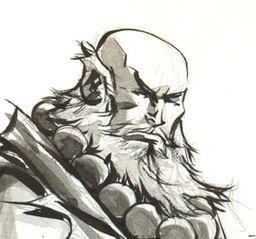